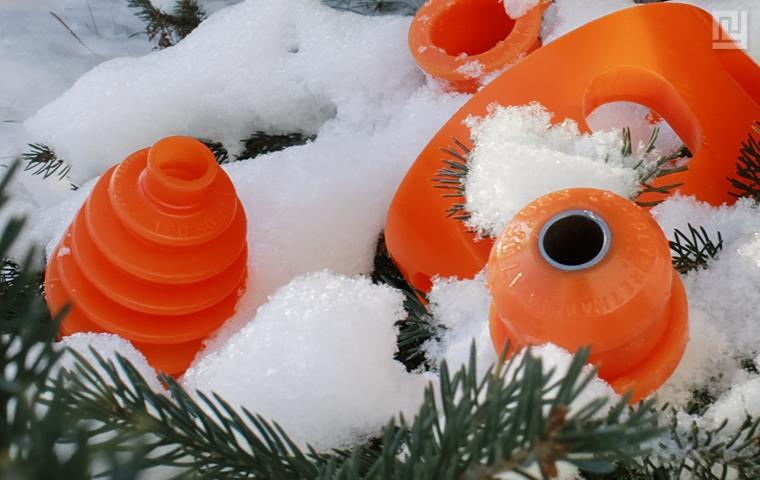 Based on the requests of our customers, most of which live in cold regions of Russia, we analyzed the cases of failure of suspension parts. One of the main reasons for the destruction of spare parts is operation in severe frosts. As you know, already at -20 ° C, most rubbers begin to lose their elasticity. This has an extremely negative effect on various cuffs, gasket rings and other products whose task is to ensure tightness. In the car suspension, especially CV joints and hydraulic shock absorbers, are most affected by low temperatures.

The specificity of the CV joint device is such that it requires plentiful and constant lubrication, does not tolerate dirt. Tightness is ensured by rubber protective covers (CV joint dust boots). The CV boots of the hinges are in the form of a corrugation so that each time the anther is compressed, the grease smeared along the walls returns to the hinge. In case of leakage, any lubricant (most often, on a molybdenum or lithium base) is rapidly oxidized (or squeezed out through the boot), which leads to wear of the entire assembly.

Do not think that only valve-free products (cv boots, bushings) suffer from severe frosts – this also applies to silent blocks, in which the most common problem is the separation of rubber / polyurethane from the metal. To solve the above problems and due to the lack of such an offer on the market, we are working to increase the stability of suspension parts to severe frosts. The work is carried out in several directions: increasing the resistance of the material to low temperatures and making changes to the design of parts. For example, we began to produce pressed and prefabricated silent blocks – due to the initial lack of connection between the material and the internal metal sleeve, separation from the internal reinforcement is impossible, and from the external it is practically excluded due to a significant reduction in load.

Our experts have developed a unique formula for frost-resistant polyurethane, which remains operational at temperatures up to -50 ° C. This fundamentally distinguishes our products not only from rubber analogues, but also from polyurethane products of foreign manufacturers, which do not set themselves the goal of adding such a property as frost resistance.

Polyurethane spare parts from other manufacturers

Polyurethane suspension parts of many manufacturers are of high quality, reliability and durability, surpassing rubber counterparts in many respects.
But they are usually not designed to operate at temperatures below -15 ° C. This is especially true for Australian manufacturers.

Polyurethane cv boot does not lose its properties in any weather

The combination of frost resistance with an advanced design makes our products unique. Product is tested at low temperatures is regularly conducted in the laboratory. In addition, in the winter of 2011-2012, tests were conducted in Yakutia, and our products withstood the “frost torture”.